Struggling homeowners have a new resource

On December 10, homeowners who are struggling to pay their mortgages due to unemployment or a significant loss in income can turn to a new online resource: www.oregonhomeownerhelp.org

The new website is home to the Oregon Homeownership Stabilization Initiative’s Mortgage Payment Assistance (MPA) program. Under the program, the state will pay the mortgages of selected applicants for as long as a year, up to a $20,000 maximum.

At the website, homeowners can learn more about the MPA program, see if they may be eligible, and sign up for regular program updates.

To find out if you might qualify for help with your mortgage, visit www.oregonhomeownerhelp.org. If you need immediate help, call the Homeowner's HOPE™ Hotline at 888-995-HOPE (4673).

Hunger
• Oregon ranks third in the nation in hunger—U.S. Department of Agriculture
• 6.6 percent of Oregon households between 2007 and 2009 experienced times when they were hungry but did not eat because there was not enough money to buy food—USDA. 2009
• Nationally, 50 million Americans lived in households that were food insecure—the highest rate since the government started surveying in 1995.—USDA 2009
• Thirty percent of emergency food box recipients in Oregon said they have had to cut their kids’ meals during the year---37 percent of these families report that this happens every month. Comparative numbers for 2008 were 27 and 30 percent. —Oregon Food Bank 2009 Hunger Factors Assessment

Unemployment
• Over 10,000 persons were unemployed in Linn and Benton counties every month for the last two year. In early 2008 there were less than 5,200 unemployed.
• Linn County’s unemployment rate was 14.3% and Benton’s was 7.5% in September 2010.—WorkSourceOregon November 2010

Foreclosures
• Oregon has the country’s third highest foreclosure rate in 2010.
• By January 2010, 22,000 Oregon residents were either in foreclosure or over 90 days delinquent on their mortgage payments.
• Two and a half million Americans have lost their homes during the housing bust.
• Five to six million more are currently in foreclosure or seriously delinquent. —Oregonian July 2010

Rural Oregon Senior Corps Programs worked together to present separate "value of volunteer" checks during three separate Board of Commissioner meetings held in Linn, Benton and Lincoln County. Commissioners in all three counties presented the partners with proclamations and their sincere appreciation for services provided by residents 55 and better.

Senior Corps is comprised of the Foster Grandparent Program, RSVP and the Senior Companion Program through which 500,000 Americans age 55 and older use their skills and experience to cost-effectively address vital community needs.Senior Corps programs made the national news 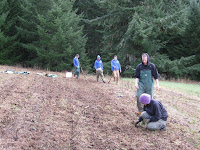 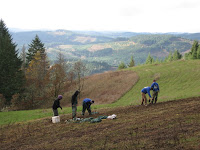 left to right) Gaelen Harrison, Thomas Eveler, Daniel Cox, Camran Hewitt,and Fela Lafi.
County Natural Areas and Parks Department and Community Services Consortium (CSC) have a history of collaboration to benefit youth in the community as well as public areas. CSC currently has a crew of five youth working on an important habitat project to expand and upgrade nectar sources at Beazell Memorial Forest for the endangered Taylor’s Checkerspot butterfly.

The crew’s goal is to plant over 20,000 native strawberry plants and restore habitat in an effort to stabilize the butterfly population. The strawberry species were collected by previous CSC restoration crews and multiplied over the summer for fall planting.

These youth are learning about conservation and employment while earning up to $2,000 each for the project, scheduled to be completed in early December. 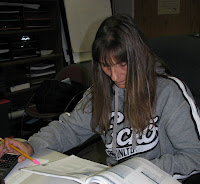 “I’ve learned things I never thought I could,” said GED student Dale Hoff who plans to study Spanish after getting her GED.

There is something special about the Community Services Consortium’s (CSC) GED class in Albany. It was designed for dislocated workers and adults who dropped out of school a long time ago.
“We saw a need to serve a different population – the returning to school adult,” said Sue McGuire-Thompson, CSC’s Operations Manager in Albany. “We found that classes needed to fit around their lives and those lives didn’t necessarily fit a school term system. So we offer open ended classes. “
“Adults we serve are seeing that you can no longer check a box on an application form to indicate you graduated from high school or not. Employers these days take time to check the details. They want to know you graduated.”
It was through a suggestion from her granddaughter’s teacher that Dale Hoff found her way to the GED class. It has been a positive experience after a job loss left her in limbo.
“I’ve learned things I didn’t know I could!” she said. “What make classes here special, are the teachers. Megan and Leslie make sure everyone understands. Even though we are in a group…no one is left confused.”
Megan Christoph, GED instructor and Leslie Hogan, a volunteer with over 25 years of teaching experience, hold the classes on Tuesdays and Thursdays for 3 hours each day in the Albany CSC location.
“Everyone here wants to learn, they come with life experience,” said Christoph. “I view the class as a partnership. We are learning together. Students are welcome to start at any time and are free to work at their own pace.”
For more information, call Community Services Consortium’s Albany office at (541) 928-6335. It is located at 250 Broadalbin SW, Suite 2A in Albany.
Photo Caption: GED teacher Megan Christoph, explains a concept to one of her students.

Spreading the word on Energy Efficiency

The Emergency Services department is gearing up for the LIHEAP season. LIHEAP (Low Income Home Energy Assistance Program) is a federally funded program to help low income individuals with their winter heating bills.

CSC Energy Assistance clients receive information about available Energy Education Workshops and can sign up for a workshop at their appointment. The workshops focus on steps people can take in their home to reduce their energy cost. Each client who attends the two hour workshop receives a free weatherization kit filled with items to help increase their home energy efficiency.

Energy assistance workers now have a better idea of energy efficiency when referring clients to the Energy Education Workshops. 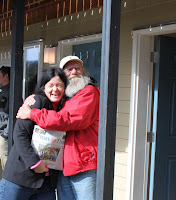 Stan Turner gives Sherry Kasper a hug of thanks in front of his new apartment.

With a cut of a ribbon, Pelican Place joins Tern House in Newport to shelter individuals and families who were formerly homeless. The twelve-apartment complex will provide twelve units of permanent supportive housing.
Stan Turner gave a tour of his new apartment to Sherry Kasper, a waitress at the Tradewinds in Newport. She not only told him about the Pelican Place newspaper article, she gave Turner 75 cents to buy the paper to read about application details.
“I needed a roof over my head. I was out in the rain and sleeping on the ground and I was worried about the coming winter,” said Turner. He was waiting for Newport CSC office to open the following morning to get an application.
“It was serendipitous,” he said.

Members of Teen Pact spent an evening at the Linn Benton Food Share warehouse repacking a 2,200 pound bag of hot cereal into over 1,500 family size bags! The group enthusiastically donned hair nets, aprons and gloves and made quick work of the ton of cereal! Lots of laughter, great stories and a desire to help others made a great experience for volunteers and staff.

Lydia Shanks, Vice President of Operations of The TeenPact Leadership School wrote to Linn Benton Food Share, “Thanks for letting our group of girls come out to help. We so enjoyed meeting your staff, touring your facility and being able to contribute to the good work you do there.” 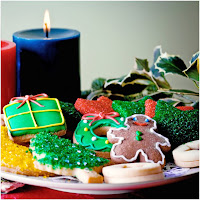 Central Linn School District is hosting their first Christmas Bazaar on November 20th called Christmas in the Country. We are still seeking vendors as well as spreading the awareness of this event. Christmas in the Country is a benefit for the business training program Cobra Student Enterprises. Through Cobra, students run businesses open to the public. Students have the opportunity to earn school credit through their work hours.

The bazaar will be held at 331 Blakely Ave in Brownsville in the District Office Gym. Central Linn students will be selling freshly baked cookies, hot chocolate and cider. If there are any questions about registering for this event as a vendor please contact Alix Stinnett at (541) 369-2813 ext 3532 or Linda Hoyer at (541) 369-2813 ext 3239.

This is the time of year when temperatures start to fall and many families in our communities turn up the heat. Low-income families don’t always have that option because these household pay 14% of their annual incomes for energy compared with 3.5% of most households. Many low-income families have been trying to catch up with bills because of the last year’s high-fuel prices or are struggling just to have their services reconnected. In fact many of the families are considering how they will make it through the winter without heat.
Community Services Consortium’s (CSC) Weatherization Assistance Program serving Linn, Benton and Lincoln counties addresses these daily energy concerns. The benefits provided through CSC’s Weatherization Assistance Program are many. The program reduces the energy cost by providing free weatherization services to low-income homeowners and renters by installing cost-effective and energy efficiency measures.

While everone’s home is different, it’s possible for a typical household to save $300 or more a year in energy costs through weatherization. During the last 30 years, CSC’s Weatherization program has helped to make over 7,300 homes safer, warmer and less expensive to live in. The dollar savings alone make a big difference for the families.

You can save energy in your home by taking these steps :

· Turn off lights, computers and other electronic appliance when not in use.

· Lower the thermostat and dress warmer. Turn your thermostat down at night and whenever the house is not occupied. Try 68 degrees F during the day and 55 degrees at night.

· Lower the temperature on your electric water heater to 120 degrees F. Turn it off when leaving for extended periods of time.

· Take short showers instead of baths.

· Clean dryer lint filter after every use.