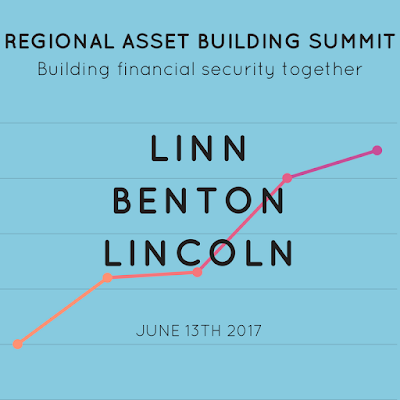 The event officially begins at 12 noon but feel free to join us at 11:30 to network!

Are you concerned about the financial security of your employees, neighbors, clients, children, and friends? Do you worry about the number of people living paycheck to paycheck without the resources to absorb everyday emergencies? Do you wish you knew more about what was happening and about strategies that you can implement or support that will build a stronger, more resilient local economy?

Please join your fellow community leaders for a lunchtime discussion of the local, state, and national trends that affect the financial security of Linn, Benton, and Lincoln County families. Come prepared to learn about the approaches, tools, and strategies that have been developed and meet the local partners that are using them. From workforce development to financial products, from home ownership to credit building, we know there are things we can do to build stronger households and a more vibrant community. And, come prepared to share your own tools, strategies, and ideas with others as we work to build a network for resource sharing and action.

Lunch will be served.

Newport, OR. Just as the sound of children’s laughter faded from the hallways of Community Services Consortium’s (CSC) Head Start program and into the summer, thunderous rumbling and scraping echoed against the colorfully - painted walls. A bulldozer, challenging the height of the NE 1st Street building, broke ground Monday for what is to become a new expansion.

The school will gain a new classroom as well as much-needed storage and teacher preparation space, stated CSC Executive Director Martha Lyon. Head Start won a federal grant that covers most of the costs to increase to full-day classes for one program at each of the three CSC Head Start locations: Toledo, Newport, and Lincoln City. Only Newport needed additional space immediately.

“I am excited for the kids, families, and especially our teaching team and kitchen helpers who have been squeezed into preparation space that was not ideal,” Lyon said during Monday’s ceremonial ground breaking.

Celebrated during the commemoration of the 52nd anniversary of Head Start’s creation by Former President Lyndon B. Johnson, the ground breaking was attended by many, including Lincoln County Commissioner Bill Hall.

“It is wonderful,” said Hall. “It is expanding opportunities for students to access full-day school year programs through Head Start. Head Start is changing for the community and families. That is why I am excited to see this project started.”
In addition to a growing floorplan (designed by Crow/Clay Architects and constructed by Hoffman Construction of Lincoln City), Miller said more staff will be hired and teaching hours increased. In three classes hours will be doubled, and another month added to the school year.

Lincoln County Head Start Director Suzanne Miller urges families interested in applying for the upcoming school year to come to any of the three sites as soon as possible, especially if they are interested in the full-day classes.

“We will be open all summer for applications. Don’t let the construction in Newport keep you from coming in and applying,” Miller stated. Office hours will be finalized next week and posted at each site and on the phone message. 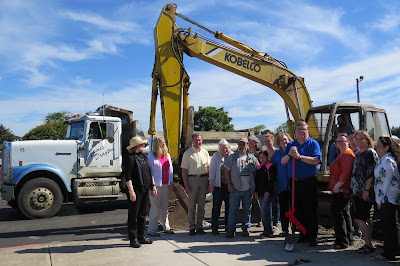 Photo credits:
Photo by Kendall S. Cable: A ceremonial ground breaking was held behind Newport Head Start building Monday. Construction is expected to be completed prior to the first day of school.