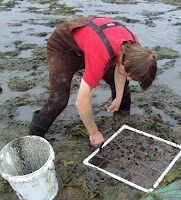 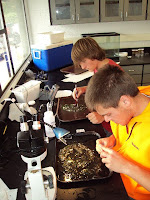 Two Lincoln County CSC youth crews have made it possible for two Oregon State University scientists to expand their research, get the results quicker and less expensively by doing field work for them as part of their summer jobs. The two crews were invited to make presentations of their work to Oregon State University scientists and other community members at the Hatfield Marine Science Center in Newport.
“We welcome you as our partners in science research. You are crucial to the Marine Science Center’s mission of education and outreach,” said Maryanne Bozza, program manager at the Hatfield Center as she introduced the speakers.
Jack Chapman, crew leader of the shrimp crew, explained that historically crews were used mainly for labor. This year, his crew progressed to taking the collected shrimp into the lab and doing the science themselves. They worked with parasitized shrimp for Dr. John Chapman of OSU. They identified and collected the shrimp, took them into the lab, typed the shrimp as male or female, measured, and recorded the data and presented the polished product to the scientist.
Chelsea Stover, the salmon seining crew leader introduced her crew. They showed how they collected their samples of young salmon smolts for graduate student Jose Marrin Jarrin by spending time in the Pacific Ocean surf carrying out huge nets and pulling them back in. Marrin Jarrin is studying the role sandy beach surf zones play as habitat for young Chinook salmon. Once the net was on the beach, the crew, on hands and knees, examined the net foot by foot and collected the young salmon. Their work took them from Cape Blanco to the mouth of the Columbia River, counting, measuring, and recording.
The youths have the advantage of learning job skills and gaining experience in addition to earning money. Two of the crew members said the experience had changed the course of their lives. They are now focusing on marine biology and are planning to attend college in the fall.
CSC offers the summer work jobs training program for 6 to 8 weeks each summer to underserved and disadvantaged youth through funding from the Oregon Youth Conservation Corp.