Volunteer In Your Community 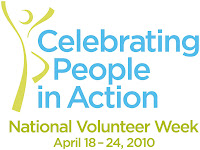 National Volunteer Week has grown exponentially in scope each year since 1974. It draws the support and endorsement of all subsequent U.S. presidents, governors, mayors, and respected elected officials.

National Volunteer Week is all about inspiring, recognizing and encouraging people to seek out imaginative ways to engage in their communities.

Below are a number of ways to volunteers in your community

CORVALLIS:
Volunteer at the Linn Benton Food Share Warehouse on the last Thursday of each month (except Holidays) from 6:00 pm to 8:00 pm. All are welcome. Bring the whole family. It's a wonderful chance to teach your children how to contribute to the community. The next opportunity to volunteer will be May 27th, 2010. For more information, call Susan James at (541) 758-2645.
NEWPORT:
SOLV Cleanups
YAQUINA RIVER SPRING CLEANUP, Yaquina River – Mouth to Idaho Point, Newport, May 16th, 9 AM – NOON: Thompson's Sanitary in Newport and Georgia Pacific in Toledo are coordinating a clean up of the river bank and roadway along Yaquina Bay Road followed by a barbeque (location of BBQ to be determined). Activities include: Cleanup and lunch. Great prizes will be handed out after the event – there will be a $500 prize for the largest group, a $100 pizza feed for second largest group and many draw prizes for everyone to get a shot at. Info & Registration: Oregon Adopt-A-River or contact Lisa Kellenberger, Lisa@thompsonsanitary.com, 541-265-7249 x1.

Amber Rodriguez, 23, of Lebanon, left, is instructed by volunteer Nathan Allen of Lebanon during an electrical training boot camp Wednesday at the Central Electrical Training Center in Tangent. (David Patton/Democrat-Herald)

One minute Amber Rodriguez was standing on a ladder working on a recessed ceiling light box and the next she was on her knees, stripping electrical wires protruding from a switch box. The 23-year-old high school dropout is one of seven CSC Youth Build Americorps students spending four days at an electrical boot camp held at the Central Electrical Training Center in Tangent. Another class of seven students completed training last week.

“I wasn’t doing anything and at 23 decided I needed to get going,” Rodriguez said of her decision to sign up for Youth Build. “I’m enjoying learning about construction and this boot camp is fun.” Rodriguez said she is considering looking for work in the construction field after completing the nine-month Youth Build program, but is also interested in corrections jobs.

“The boot camp is fun, but it has also been frustrating at times,” Rodriguez said. “I’m starting to get the hang of it.”

Dan Blondell is a veteran electrician who is helping guide the students as they wire a scaled-down version of a home within the training center. He said he is impressed with the students. Youth Build workers put the walls up a couple weeks ago and rooms bear labels such as “bathroom” or “kitchen.”

Tony Frazier is a construction trainer and Lasette Doherty is the program coordinator for Youth Build. They were on site Wednesday. Shortly after lunch, students worked hurriedly to complete wiring projects because a Linn County inspector was scheduled to visit at 3 p.m. to look over their work, just like on a real job site.

CSC Youth Build Americorps is based in Lebanon and works with 28 low-income students ages 16 to 24 who have dropped out of high school or are struggling to stay in school, Frazier said. There are about seven students in each class, Frazier said, and they combine classroom work with hands-on activities such as helping with Habitat for Humanity houses in both Lebanon and Sweet Home. In addition to classes and construction training, the students receive a stipend of about $550 per month for their efforts.

John Roosa, 20, dropped out of Lebanon High School as a junior and has been doing odd jobs ever since. He was busy Wednesday setting up an electrical breaker box.
“I want to do something with my hands,” Roosa said. “I’m going to learn to be a wildland firefighter this summer. I think I would like to be an electrician.”