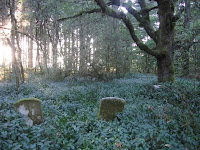 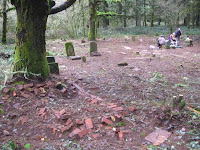 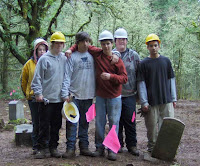 As Sierra Raymond tugs out another handful of vines, she catches a glimpse of a headstone hidden among the dense undergrowth. She starts working around the stone, methodically, until she can read some of the writing. “EMILINE” reads the large etched writing across the top. Sierra lightly brushes away more of the dirt and vines clinging to the stone. She reads, “Daughter of W. & M.A. Hurlburt, Died…” and the rest is illegible, covered in dirt around the base of the weather-worn stone. “I have never seen any stones this old ever in my life. I didn’t think that those stones could last this long,” Sierra says. She wonders how old Emiline was, how she died, and when she lived, but for the moment, she has a job to do: continue clearing the undergrowth from the rest of the old Claypool/Parrish Cemetery near Brownsville in Linn County, where 37 known pioneers were buried.

Sierra is not the only one working at the cemetery. She is one of the 12 students who make up the Santiam Wilderness Academy. The Santiam Wilderness Academy (SWA) is an outdoor alternative High School program managed by the Community Services Consortium in Lebanon. The twelve SWA students from Sweet Home and Lebanon High Schools come to SWA for different reasons: trouble with attendance, struggling with large class sizes, or falling behind in credits. But they all have one thing in common: the students in SWA love to be outside. As Sweet Home student Kris Garrett puts it, “I’ll actually go to school; it’s something about being in the woods.”

In its fourth year, SWA offers students an opportunity to further their education and develop work skills in the context of environmental and community stewardship projects. Students spend the first half of each week in the classroom, working individually on core subjects such as math, language arts, and social studies. In the classroom, the average teacher-student ratio is 1:5. Students who struggle in large class sizes can shine under the individual attention. Sweet Home student Shaylynn Watkins realizes the value of small class size. “I can’t focus when I’m in a regular high school environment,” she says. “I work better at my own pace in an environment that doesn’t have as much conflict.”

The second half of the week, SWA goes out into the community to work on environmental stewardship projects. Since the 2009-2010 school year started, SWA has worked at Cheadle Lake digging out invasive Yellow Flag iris, cleared one mile of the Foster Lake Trail, planted 500 trees at Crabtree Creek, dug out Himalayan blackberry and Scotch broom from Riverview Park, mulched 45 Ponderosa pines and 70 Western cedars at Green Peter, and cleared the half-acre Claypool/Parrish Cemetery. “SWA shows us that we need to be responsible and need to be at work every day,” says Sierra Raymond. The students engage in hands-on learning in biology, physical education, and basic work skills while they are completing field projects. This integration of school subjects with the outdoors gives students a renewed interest in learning. “SWA has changed my future by making me think more about my goals,” says Sweet Home student Joey Persinger.

In September of 2009, SWA applied for a grant from the Oregon Commission on Historic Cemeteries (OCHC) to clear the Claypool/Parrish Cemetery. SWA became aware of the Claypool/Parrish Cemetery through the Lebanon Genealogical Society. Lebanon resident and Genealogical Society member Ken Smith had discovered that his great-great-grandfather was buried in this “lost” cemetery. It took Ken three years climbing the hills around Brownsville and Lebanon to locate it on private land. He found the cemetery completely overgrown. The first stone he unearthed using a machete was that of his ancestor John Anderson Smith, who came to Oregon in an 1853 wagon train. After he found the cemetery in such disarray, Ken started searching for a crew to help restore the cemetery.

SWA was the perfect fit because of the crew’s experience with outdoor conservation projects. With the landowners’ generous permission, Ken Smith and SWA staff worked to put together an application to the OCHC and was awarded 1 of 19 grants across the state. The commission is part of the Oregon Parks and Recreation Department. The OCHC supports “volunteer organizations and individuals… working to protect and restore the state’s historic cemeteries.” Other funding that supports the project and crew includes the Oregon Youth Conservation Corps and the American Recovery and Reinvestment Act through the Oregon Youth Employment Initiative.
The Claypool/Parrish Cemetery is located on private land between Lebanon and Brownsville, on a forested hill overlooking both the original donation land claims received by the Rev. Reuben Claypool in 1848 and Gamaliel Parrish in 1847. The first burial was the six-year-old William F. Dickson, Claypool’s grandson, in 1861. Burials continued 1949 with Emma Parrish being the last known burial. Around that time, the half-acre cemetery was fenced to keep out livestock and wildlife, including a herd of elk. While keeping the historic headstones from being trampled, the fence allowed the underbrush and trees to grow unchecked.

SWA students worked for 7 days to clear the undergrowth and a multitude of small saplings. The first day, only a handful of mossy headstones could be seen peeking above the undergrowth. As the ground became visible, students discovered more and more headstones, footstones, and other markers from the Pioneer Era, some of them buried four to five inches in the dirt. It became a treasure hunt.

“The most challenging thing was trying to be so careful about not breaking the headstones, but not knowing where they were,” says Sweet Home student Frisco Whitfield. As students raked the ground free of plants, they unearthed the corner of a stone here, a fragment of a name there. Even on the last day of work, students uncovered the completely buried headstone of Rebecca Jane (Claypool) Dickson! Overall, the crew found 35 of the 37 headstones listed on the cemetery survey done by Leslie Haskin in 1939.

“The hard work by the conscientious SWA students has revealed valuable data for persons searching for genealogical information of these Oregon pioneers, data which has been buried and unavailable for many years,” says Ken Smith. Students engaged in practical, hands-on learning throughout the course of work in the cemetery. “My favorite thing was uncovering the headstones and seeing the years, pictures, and all the different names,” adds Frisco. Students determined the relationships among the people buried there and tried to decipher barely legible names and dates. Later in the spring, the students will carry out a mapping project of the cemetery. The hard work and outdoor learning involved in this project have given the students a feeling of pride and accomplishment in themselves. Lebanon student Shawn Burleson sees the community value as well, “We are helping people learn about their family heritage.”

The loans are available for home repair needs such as roofing, heating and electrical systems, plumbing, foundations, structural work, and other conditions affecting health, safety and livability.

No interest is charged on these loans, and no monthly payments are required; loans for rehab of owner-occupied properties are not due and payable until the property is sold, transferred, vacated or refinanced; rental property owners must contribute 50% of the cost of the project, must agree to rent to low-income tenants for the life of the loan, and must pay off the loan in ten (10) years.

Interested property owners are encouraged to contact Jeni Wells-Whitney at CSC Community Housing Services office in Corvallis to find out if they are eligible, (541) 758-2636 or jwwhitney@communityservices.us. (Note: for rental properties, income guidelines will apply to the tenants.)

RSVP sponsored AARP Volunteers, trained by the IRS will prepare Federal and State Income Tax returns until April 15th. This service is free of charge for middle and lower income persons of all ages in:

This article was originally published in the Vol. 17, Number 1, February 2010, issue of CSC's the Compass.

Learn about 2009 tax credits and free ways to file:

What is the EITC, and how can it help me?
The Earned Income Tax Credit (EITC) is for people who work and meet certain income guideline. You may get money back when you file your taxes and keep more of what you earned. It can make a big difference!

Learn more details and file your tax credits at a free tax assistance site near you. You may even get credits for the last two years.

Note: Alimony and child support payments do not count towards income.

How do I know if I qualify for EITC?• You must have worked and earned income
• You must have a valid Social Security number
• You cannot be counted as a “child” by someone else

A “qualifying child” can be your...
Biological or adopted child, stepchild, foster child, brother or sister, stepbrother or stepsister, ...or the children of any of these people. A “child” must be younger than the person claiming the child; not have filed a joint return other than to claim a refund; and under 19 unless they are a full-time student or
permanently or totally disabled

What if I don’t owe any tax?
No problem. You can still get the tax credits.

Will the EITC affect my benefits?
Generally, no. The credit does not count as income for Medicaid, food stamps, Supplemental Security Income (SSI), or federally-assisted housing programs.

Retroactive EITC
If you qualified for EITC in previous years but didn’t file or claim the credit, you can still file or amend incorrectly filed tax returns for the previous two years to claim a refund.

Where to go for more information:
If you think you might qualify for the EITC and would like to check your qualifications, you can:
• Go to the IRS website at www.irs.gov and select “EIC Assistant” under Online Services
• Try the EITC eligibility calculator at www.cbpp.org

To find free online tax filing tools and tax preparation services:
• Go to the IRS website at www.irs.gov and select “Check Out Free File” for a list of free on-line tools.
• Try the ICAN! EFILE free on-line tool at www.icanefile.org. (Available in English and Spanish.)