Tale of the Watery Grave Marker

It sounds like one of those misty recollections from childhood, one straddling the line of certainty between reality and dream: When he was 12 years old, Tim Smartt saw a tombstone sticking out of the murky waters of Crystal Lake.

"I was really creeped out," remembered Smartt, now 37.

But as it goes with childhood memories, he soon forgot all about it.

Thursday, the memory was revived - and a link was reconnected with Corvallis' early history. But that's getting ahead of the story.

A few weeks ago, Smartt, his son Isaac, and his friend Walden Burt were exploring the area around the slough, which borders pioneer Crystal Lake Cemetery. Smartt flashed back to his eerie boyhood experience and wondered if it was possible that the grave marker he remembered was still in the water. After chopping through brambles to the water, to his surprise, he found something sticking out of the water.

Smartt and Burt returned with a rowboat to get a closer look. In the eerie, swampy lake, it stood: a moss-covered marble grave obelisk, about 3 feet high, missing its decorative top.

Smartt wanted to find out to which grave in the cemetery the marker belonged. He called the Benton County Natural Areas and Parks Department, which took ownership of Crystal Lake Cemetery in 2001. For the 141 years before then, the Corvallis Masonic Lodge No. 14 had operated the cemetery, which was established in 1860.

Thursday morning, county employees and a crew from the Community Services Consortium came out to remove the obelisk from Crystal Lake. While workers prepared to move the marble obelisk, which stood exposed in the shallow lake, Smartt and Isaac wandered across the lake bed. Suddenly Smartt gave a yell: They'd just discovered the grave marker that probably went with the obelisk. 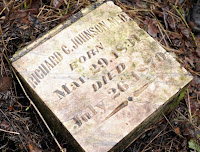 "This was a surprise," said Al Kitzman, Benton County parks superintendent, as he inspected the find.

The marker was about 40 feet from the obelisk; a concrete block, which might be the base for both pieces, was another 20 feet or so up the west side of the embankment that borders the cemetery. "It probably came down here the same time the obelisk came down here," Kitzman said. "How that obelisk got way over there is a mystery."

It took several people to lift the obelisk, which weighed a few hundred pounds, into an ATV trailer. To move the inscribed marker, metal rods were strapped into an "X" atop the stone, so four people could grasp the rods and carry it to the ATV. Both pieces were taken to a county storage area for further inspection.
By the end of the day, more about Dr. Richard C. Johnson also had emerged.

So how did his tombstone end up in Crystal Lake?

Smartt was concerned the stones had been taken from a grave by vandals, or washed down the embankment in a flood. He wondered if the doctor had been lying in an unmarked grave for decades.

But Judy Juntenen said that Johnson does have a headstone. Juntenen, a former research librarian for the historic society who has surveyed the cemetery, was able to check records Thursday and discover that Johnson now shares a marker with his wife, Florence.

Florence remarried after Johnson's death, and her marker has a different last name, but she apparently chose to be buried with Johnson. Her family, the Averys, also are buried in Crystal Lake Cemetery.

Juntenen thinks the marker must have been replaced sometime after Florence died in 1928. It's possible the old tombstone was just thrown down the embankment as a quick and easy means of disposal.

"It's in really remarkably good condition," she said. "There are fractures on the shaft, but that's not terribly unusual considering that it's probably been down there for some time."

She has just started researching Johnson and said she plans to continue trying to find where the long-missing piece of marble fits into the Avery family history.

Community Services Consortium (CSC) has announced the beginning of their Healthy Kids Outreach and Enrollment Campaign to educate the community about the Healthy Kids Program and to get more children enrolled in health coverage. CSC received this grant from the Department of Human Services as part of their statewide focus on increasing enrollment in health coverage for children. “It is estimated that around 8,000 children across Linn, Benton, and Lincoln counties that are between 0-18 could be eligible for a part of the Healthy Kids program. We have a lot of families to reach and a lot of kids to get enrolled in a short amount of time,” states Tifani Erpelding, CSC’s Healthy Kids Program Coordinator for Linn and Benton Counties. “We are excited to begin working with our local partners to get this message out and to give kids the healthy chance they deserve.”

Healthy Kids is free or low-cost health care coverage for children and eligibility is mostly based on income. Recently the income guidelines were increased to allow more children to qualify. For example, a family of four with an income less than $66,000 may be eligible for low-cost coverage. Families are encouraged to apply even if they think they might not be eligible or if they weren’t eligible in the past.
For more information about scheduling a presentation or partnering with CSC or if you would like help with your Healthy Kids Application please contact Tifani Erpelding at 541-758-2641 in Linn and Benton Counties and Susan Stewart at 541-265-8505 in Lincoln County. Information about the program can also be found on the CSC website at www.communityservices.us.

The Linn, Benton and Lincoln Workforce Investment Board Receives Grant for Weatherization Training

Corvallis, OR— The Linn, Benton, Lincoln Workforce Investment Board (WIB) has received a $450,000 grant from the Federal Department of Labor to recruit dislocated workers and youth to enter training in the weatherization and home retrofit industries. The grant money is part of the State Energy Sector Partnership grants, made through the American Recovery and Reinvestment Act as part of a $500 million nation-wide initiative to promote economic growth by preparing workers for careers in the energy efficiency industries.
“Community Services Consortium (CSC) will provide the training in collaboration with two local community colleges, the Oregon Energy Coordinators Association, and Northwest Energy Education Institute,” said Steve Bekofsky, Director of Linn, Benton, Lincoln Workforce Investment Board. “We are excited to work with Community Services Consortium and project team members to train for jobs in a high-growth industry.
One hundred seventy five individuals will be recruited for training in the weatherization and home retrofit industries. The training results in a number of certifications and prepares workers for occupations in energy efficiency and renewable energy such as Weatherization; Energy Auditors; Energy Analyst; HVAC; Air Sealing/Duct Sealing; Energy Education; General Construction/Carpenter; New Construction/Remodeling; Insulation; Window Installers; Roofers; and Painters.
“Our Weatherization Training Program has accomplished a great deal in less than one year of operation,” said Clay Martin, CSC Workforce & Education Director. “We are looking forward to working with all of our partners on this new project.”
The Workforce Investment Board will be forming a “Green Jobs Council” to monitor this project. Potential members of the Green Jobs Council include: Linn-Benton Community College, the Oregon Employment Department, Albany Millersburg Economic Development, Economic Development Alliance, Lane Community College, Oregon Energy Coordinators Association Training and Technical Assistance Committee, and the Oregon Southern Idaho Laborers-Employers Training Trust.

The Linn, Benton, Lincoln Workforce Investment Board (WIB) is a public-private, business-led organization dedicated to providing and maintaining a high quality workforce in the region. The WIB’s membership includes representatives of private business, state agencies, local government, community organizations and organized labor. The WIB oversees the WorkSource Centers and contracts with Community Services Consortium to provide services to adult job seekers, dislocated workers and youth aged 14-24. Additional information about the WIB can be found at: http://www.region4wib.org.