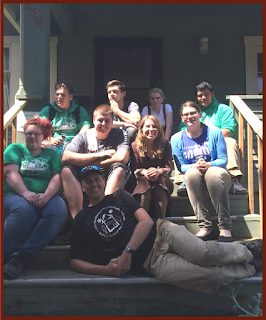 Kennhy came to Corvallis and CSC from Southern California, where he was laid off from his bakery distribution job. Kennhy dropped out of high school to work entry-level, and worked his way up. He came to Corvallis with his spouse and two children, and recognized that he needed to get his GED before moving forward with his life. When he first connected with CSC, he had third-grade reading and math skills. At the age of 22, he had made a decision to better himself.

Within a few months, Kennhy raised his reading level while being tutored at the CSC Youth House. His progress was remarkable, and one day we started discussing books. We commented that he had made so much progress since he arrived. That’s when he said that one of the main reasons he was working so hard was so he could read to his young children. Specifically, he liked to read them Harry Potter. He said that it was good practice for him, and that his kids loved the story and hearing him read it to them. That was his motivation, and he took that to heart.

Kennhy has not only brought up his reading level and math skills - he received his GED and will be going to truck driving school. Kennhy has immersed himself in the community through volunteering with Habitat for Humanity, his church, and by being a positive person while moving forward with his life.