For Clyde Smith, it was an easy decision to donate his time to repair and maintain the building and grounds of the Head Start school site in Newport. It began with his marriage four years ago to Melissa Smith, who is a classroom teacher for the school. And it didn't hurt that he's retired and has an extensive background in horticulture and landscaping. 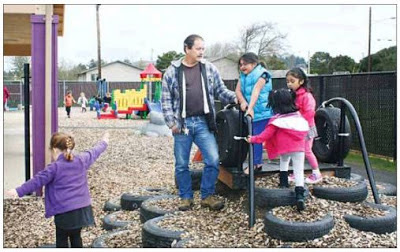 So when the Newport school moved into a building on the corner of Northeast Benton and First streets that desperately needed maintenance and upkeep, Smith figured two years ago that he had a long-term project that was perfect for a man with time on his hands.

"Head Start is federally funded for education only and there's no money for building or grounds maintenance," he said. "So, I pitched in."

The large school building was in decent shape, though landscaping was a problem.

"Around the sidewalks, the county had filled in holes in the chip rock and pavement with soil and planted clover all over the place," he said. "It just took off and there were bees everywhere, which isn't good for the kids in the playground. It took me eight hours to cut the grass the first time, and I still need to work on it regularly."

He's planted trees and shrubs around the building in an effort to beautify the landscape and eventually provide some protection to an area that is often besieged by the wind that regularly barrels out of the southwest.

Community donations to the landscape project have come from local families and several businesses, including tires donated by Les Schwab in Newport that Smith has crafted into a play structure.

On tap for this summer is a project to paint the building. Smith bought the paint and is having a friend apply it, charging only the labor cost.

One of the most difficult projects has been Smith's attempts to stabilize the chain-link fence that surrounds much of the large corner lot.

"About 140 feet of the fence was blown down flat," he said. "I've done some things to make it more stable, but short of putting some trees along it for protection it'll probably happen again. There's quite a wind coming through here during the winter."

Smith's landscaping work has been important since the Community Services Consortium, which runs the county's Child Development Services/ Head Start program, depends on volunteer work and donations even more these days than in previous years.

"Clyde is a very dedicated person and his in-kind help has been invaluable," said Suzanne Miller, director of the county program. "It wouldn't have gotten done without him and others."

There are about 160 children and families involved in the county Head Start program, including 60 in two classrooms in Newport. Lincoln City and Toledo also have schools.

The program's mission has gotten even more difficult to finance in recent months because of federal cuts.

"We're five months into our budget (Oct. 1 through Sept. 30) and in late February we found out that $46,454 would be cut out of our federal allocation because of the sequester," Miller said. "That's about 5 percent of our total budget of $950,000 (including state funds). That's six students and families that we can't serve, though we have found a way to weather the storm."

The program will shave three days off the school year, an action the federal government will allow. And some staff members will be put on call, cutting the normal full and part-time staff from 32 to 23, Miller said.

Head Start, she added, is used to getting by with the help of others and the new cuts are just another challenge. Clyde Smith said he'll do whatever he can to help because of the need. Plus, he enjoys it.

"It's great to see the happy faces and enthusiasm of those kids every day," he said. "The school needs help so the kids can have a neat place to go. That's my payoff for helping out."