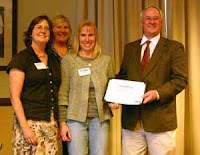 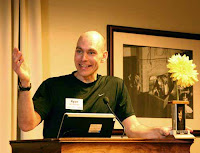 “Every single year you come through with flying colors.”

That was the sentiment of Ryan McCambridge, coordinator of Linn-Benton Food Share, as he praised the success of the annual OSU Food Drive, which provides the Food Share with 30 percent of its annual food acquisition budget. Kate Sanders of University Events coordinated this year’s OSU effort.
McCambridge and Mike Gibson, manager of the Linn-Benton Food Share, took part in a ceremony this week honoring the departments and offices that raised the most money and food for the annual drive, which took place during the month of February.
In total, the event gathered more than $100,000 in cash donations and 19,000 pounds of food. By turning the cash into its equivalent in pounds of food, the total equals more than 522,000 pounds of food, which will directly benefit the community.
“Times are tough for everyone these days,” Gibson said, referring to the recession and to OSU’s recent decision to furlough faculty and staff. “And yet you produced the best food drive ever.”

Oregon currently has the second highest rate of hunger in the nation, and more than 11,000 Linn and Benton County residents are listed as unemployed, not including those who are now working part time or have dropped out of the system altogether.

Over the last year the Food Share has seen an increase in demand of 1,800 requests for emergency food boxes. Gibson said there are many sources of support for the Food Share in the community, but none as large as OSU. “It makes us feel good to know we’ve got the whole community behind us,” he said.

President Ed Ray said hunger has real consequences to a person’s ability to work and learn, and those consequences are long-term. He praised the university community’s increasing support for the food drive, and noted that donations have increased by 100,000 pounds in two years.